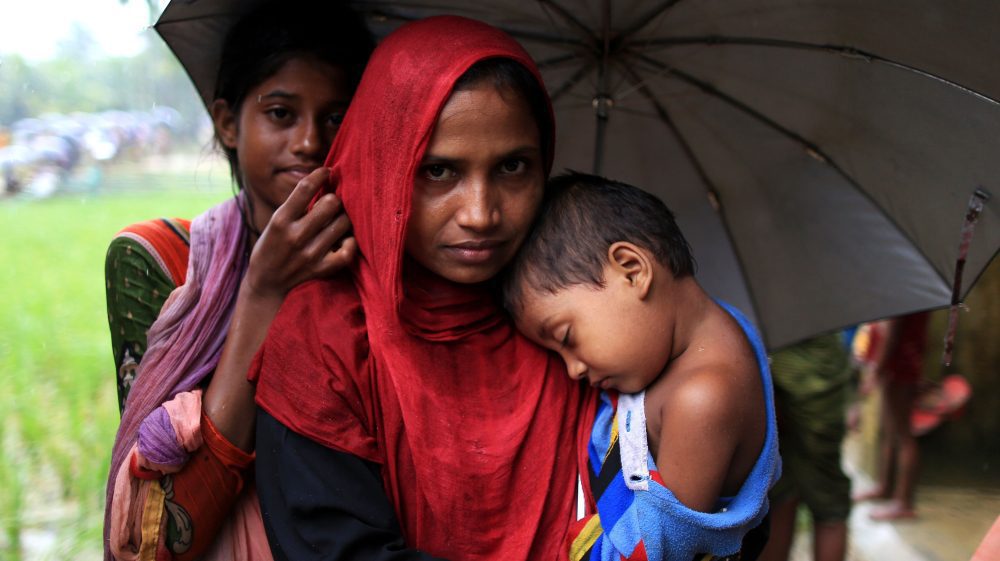 Last August the Rohingya living in Myanmar witnessed the beginning of an age filled with atrocities and massacres. Militants attacked government forces whom in return initiated a “clearance operation” that aims to erase Rohingya Muslims from Myanmar (estimated at 1.1 million out of a total population in the country of 53 million). Instantly, thousands of people had to flee their homes and find refuge in Bangladesh, some of which have died along the way.

Aspirations of ethnic clearing were realized as early as mid-August when almost 160,000 individuals fled to Bangladesh in just one night. Myanmar hosts today the largest group of stateless persons in the world.

As a Muslim minority, the Rohingya have suffered discrimination of all sorts — a matter that has shaped into what the UN High Commissioner for Human Rights labeled as a “textbook example of ethnic cleansing.”

The 1982 Citizenship Law has been denying the Rohingya nationality for the past decades, deeming its holders ‘refugees’ who originate from Bangladesh. The law prohibited  any contribution of theirs in the political sphere’s decision-making processes. Following several years of tension, an unwanted stateless population soon became a refugee population.

Simultaneously, the United Nations and other prominent international organizations catering for human rights, such as Amnesty International,  have spoken up on the events in Myanmar. States and agencies came to the rescue of refugees to the extent the Myanmar government allowed them to. While the government of Myanmar has denied any and all allegations of ‘ethnic cleansing,’ the world is aware that a genocide is in the making.

Before August 25th, not many had heard of the Rohingya and the ongoing ethnic tensions in Myanmar. Awareness on the discrimination and violations that occurred against the Rohingya was little to none. When all there is to talk about are ethnic tensions and ‘subtle’ discrimination, the information was deemed unworthy of reporting on a large scale. Then, the moment tensions broke and crime occurred, the information was reported albeit sensationalized.

Unfortunately not much effort is being put into preventing human rights violations. Once a rule is broken and a crime takes place, perpetrators are accused, and sometimes persecuted. Persecution is a form of  retaining justice, but it does nothing to mend the innocent lives lost.

If states and institutions have no power preventing such crimes, possibly because Myanmar’s government refuses to cooperate, the least that can be done is raising awareness on a stateless unwanted group of people deemed ‘the most persecuted minority in the world’. Informing the world of  ongoing crimes and violations, garnishing them and sensationalizing every photo of a family fleeing to Bangladesh , is no way near preventing crimes and saving lives.

In a world that is already witnessing an alarming refugee crisis, what’s happening in Myanmar deserves more from the media.

The Rohingya deserve having their voice heard loud and clear. The names of those who’ve had their lives cruelly taken should be imprinted across every country’s border, every government’s premise, and every media outlet headline.

Colonial condescension: The life and crimes of Prince Philip

America is Back (in the Middle East): The Biden Doctrine

What Happened in America? An Imperial and Neoliberal Triumph

US Sanctions On Bassil: Why Now And What Do They Mean For Lebanon?