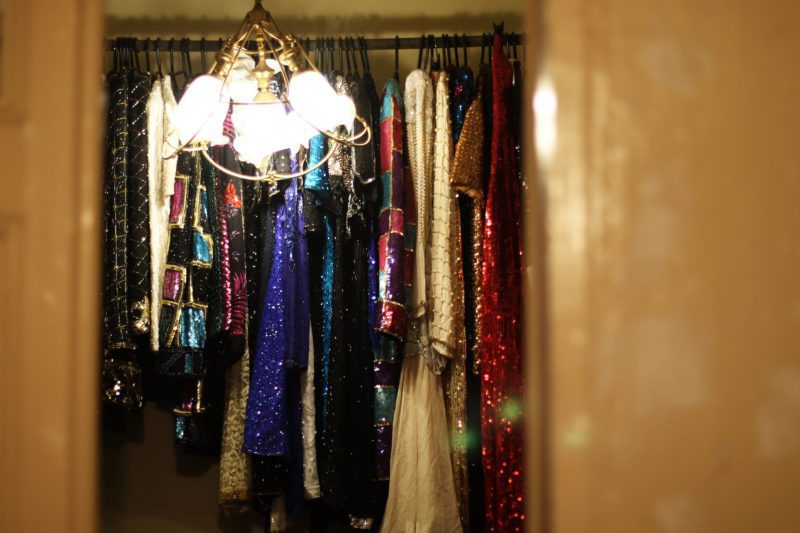 Epaulettes, latex boots, and oversized satin shirts may not be the everyday fashion but these vintage classics haven’t completely disappeared from the fashion industry.

In the backyard of Depot-Vente, a vintage shop on Kurd street–nestled between the up-and-coming Mar Mikhael and the historical neighborhood of Bourj Hammoud–Nawal Akl updates her Instagram account with pictures of her clients wearing her carefully chosen merchandise.

“It’s the only marketing I do,” Akl, who owns the shop, admitted, her neon radio blasting in the shop. “I did no advertisement whatsoever, except [on] social media, and it worked.”

With one shop open everyday from two in the afternoon, and a second store open on Fridays and Saturdays, Depot-Vente grew from a wine gathering with friends into a full-time job.

Like any other success story, Akl’s path wasn’t an easy ride. Glitters, feathers and leather came at the cost of days of tears, hours of sweat, and a will to share her passion of what she calls “pre-loved.” Often used to define vintage clothing, “it’s a way of saying [the clothes] have been really loved, and worn with love,” she explained.

Over six years ago, Akl opened her first shop on Kurd Street. “A friend of mine once asked me to be the stylist of his movie maybe because he thought I had a particular eye. All I had previously done in my life was being a housewife, so when he asked me, I was really touched and flattered,” she said. “I never thought of opening a shop until my daughter turned 13, and explained to me that she had a life. I cried for two days, then said to myself I need to do something with my life, and I opened my first shop.”

Although the vintage industry is still nascent in Lebanon, some countries have seen this trend boom over the past few years. According to the National Association of Resale and Thrift Shops in the United States, an average of 17 percent of Americans will shop at a thrift shop during a given year.

In Lebanon, this choice of wardrobe is a longing to stir away from the sometimes archaic values the older generations uphold on their offspring.

“There’s a young generation that focuses more on accomplishments, work, dreams, more than social background, or whoever their parents are. When I see those young people who fight, who meet and discuss intellectual matters, I realize that Beirut is not just a commercial mall, it’s a city of artists, thinkers. It’s a form of social and cultural revolution.”

Depot-Vente sells itself by selecting “unique, quality pieces, who correspond to your identity,” explained Akl. She imports her clothes from Brussel and refuses to buy from particulars. She justified her principle by insisting on keeping a low price range, going from L.L3,000 to L.L200,000, for high-end pieces made of sequins or authentic leather.

“I worked on giving a cool image to the brand. Emerging artists and singers who are cool wear clothes for L.L5,000 and LL20,000. You don’t see it as cheap but as cool,” the woman added.

Production companies also visit her shops, with different intentions in mind. “Once, in the case of a TV series, the stylist wanted his actress to be sexy, for a 60’s show, and he chose completely out of place epaulettes from the 80’s, with a plunging neckline!” she angrily recounted.

The shop owner admitted she could get particularly sensitive when it comes to the 1980’s, as it is her favorite decade.

“In the 80’s, the woman wore high heels, epaulettes and men’s jackets,” Akl explained, herself wearing heels from the 80’s, along with a black leather skirt. “She took over. She understood something wasn’t working, after the 60’s and 70’s with all the hippie movements and the flowers, so she went to the other extreme”.

“I like strong women, I like seeing women who feel strong […] Women can know they are sexy, and assume it.”

Although she worships geometric shapes and unusual textures, her favorite piece is an orange pajama with psychedelic patterns from the 60’s. “It belonged to my older sisters, I kept it with me since I was 8. And I still have it,” she proudly admitted.

With two shops already running, Akl doesn’t plan on expanding more for now. She wants to preserve this “salon spirit” as she described it, where people come in, have a cup of coffee and enjoy the shop. With her positive smile and retro sunglasses, Akl is determined to enjoy life to the fullest.

“I am a leftist, but I drive a Porsche,” Akl playfully said. “I reached an age when I said to myself, it’s only now that I can drive it, afterwards it might be too late.”