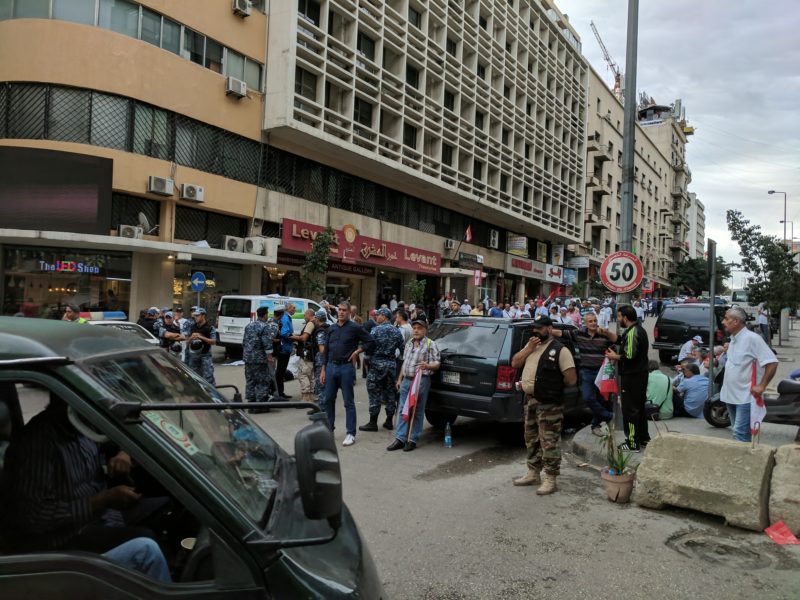 “Almost all public sector employees observed a 140% increase in salary when we, the retired from Lebanese military institutions, have in fact only observed an overall increase of 35%” General Abou Maachar told Beirut Today. According to the retired general, the increase equals roughly to 90,000 LBP ($60), including the tax cut.

“We are the ones who put our lives out on the limb for the sake of Lebanon but employees of the railway and public transportation authority will have a salary hike of 140%” he lamented.

Surrounded by anti-demonstration squad officers that were also blocking the access to the Ministry of Finance’s Directorate of Revenues, the retirees chanted the national anthem and called people who were stuck in their cars to join them in their rightful protest.

When asked about their demands, General Abou Maachar read a statement in favor of a law amendment that was proposed by ex-PM Najib Mikati which is still “rotting in the drawers of the Lebanese Parliament.”.

“If they adopt it, we will immediately open the road again.”

Addressing the citizens stuck in heavy traffic around Beirut, General Abou Maachar appealed for them to understand their position and help them get their most basic of rights. The protest which was held in one of Beirut’s busiest streets at the same time as a parliamentary session was underway, was drowned out by the blare of disgruntled citizens’ horns.

Citizens interviewed by Beirut Today expressed their frustration for having been stuck between the hammer of the authorities and the anvil of protesters.

“We were expecting heavy traffic because of the rain today, but the problem came from human factors” said a helpless policeman as he attempted to regulate traffic amid a chaotic scene of cars trying to flee the area by going through one way narrow roads of Khandaq el Ghamiq.

From cities to villages: Reverse migration on the rise in Lebanon