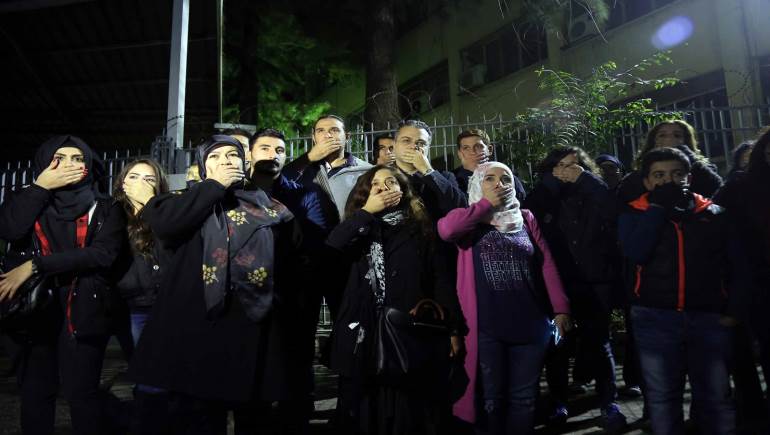 The tweet by Lebanese producer Charbel Khalil mocked the recent royal decree that permitted women in Saudi Arabia their basic right to drive. Local newspaper The Daily Star translates the Arabic tweet to “The news of allowing women to drive in Saudi Arabia was incomplete. Women will be allowed to drive the car only if it is rigged [with explosives].”

Though Hobeiche “unliked” the tweet, she was asked to step down from her position and was reassigned within the ISF following an investigation.

#AnAccidentalLikeIsNotACrime became a trend on Twitter, with many Lebanese pouring in their accolades. “Suzan Hajj is an example of a successful woman in Lebanon,” said one Twitter user. Another said that she was “…always a role model for Lebanese women…”

The incident that led to Hobeiche’s sacking actually resembles much of the so-called cybercrimes that she and the bureau cracked down on: social media posts on the Lebanese political and corporate elite.

Everyone in Lebanon, not exclusively journalists and activists, are deprived of freedom of speech. Hobeiche and the Anti-Cybercrime and Intellectual Property Rights Bureau played a central role in that.

For example, in July 2017, Lebanese journalist Fida Itani was interrogated and detained overnight over a Facebook post that criticized Foreign Minister Gebran Bassil.

And in February, Ahmad Amhaz, venting his frustration over socioeconomic hardship compared the President Michel Aoun, Prime Minister Saad Hariri, and Speaker Nabih Berri to different animals in a Facebook post. He was detained for nine days.

What makes this whole ordeal even more ironic is that the bureau summoned two people just days before the incident took place.  Journalist Omar Qasqas and activist Tarek Abou-Saleh were summoned for an interrogation scheduled for October 2nd, 2017, the day Hobeiche was sacked.

Moreover, Hobeiche was also heavily criticized by Saudi media platforms – arguably harassed. Al-Arabiya English posted pictures of her with her husband and children in their coverage of the incident.

This resembles what many journalists and activists in Lebanon go through, should they be vocal about the government. An example is activist Assaad Thebian affiliated with “You Stink”. During the height of the 2015 garbage protests, members from the Free Patriotic Movement (FPM) one of Lebanon’s most powerful political parties, dug into an old Facebook post where he mocked Easter celebrations with sexual innuendos. Thebian was harassed and seen as sectarian, anti-Christian, and also potentially faced trial. This was done in attempt to delegitimize the uprising. However, by no means did the Anti-Cybercrime and Intellectual Property Rights Bureau see that as defamation or slander.

Discussions should be about the cybercrime bureau, not Hajj

The discussion shouldn’t be revolving around Hajj. In fact, we should be condemning what happened to her as we condemn what happened to the dozens of people who she was responsible for suppressing their basic right to freedom of speech. These basic human rights violation took place prior to her appointment, and they will continue to do so after.

Hajj was a symptom of the problem – and to a minimal extent – a victim of it.

The Anti-Cybercrime and Intellectual Property Rights Bureau remains to be a corrupt institution that has done everything but protect people in Lebanon.

Cybercrime is not an abstract concept; it is a huge threat worldwide. We’re looking at problems that risk the safety of families, including crimes against children and the mass sales of fake medicines.

The long list of cybercrimes that are putting us all at risk in no way includes social media post that criticizes politicians and business executives or journalistic content.

Whether it was an accidental like or an intentional one, we will all continue to be at risk in a country that continues to lie through its teeth about its support of human rights and dignity.