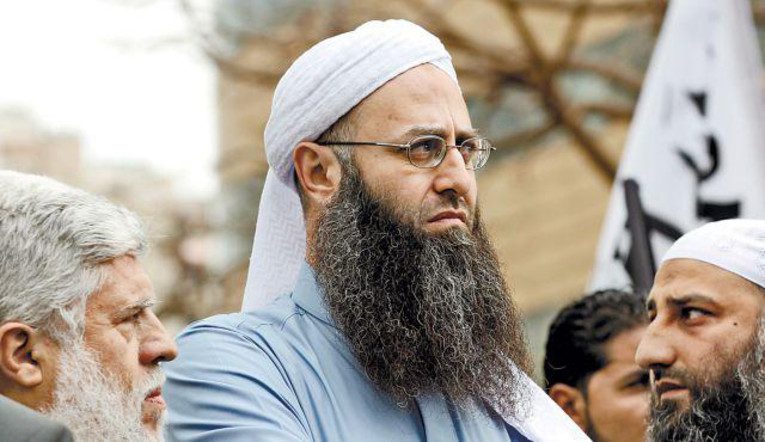 Extremist salafist cleric Ahmed al-Assir was sentenced to death on Thursday along with eight other affiliates attacking the army during the 2013 Abra clashes in south Lebanon.

The military court also issued prison sentences and fines to 30 others, including renowned singer Fadel Shaker, who was sentenced to 15 years in prison and hard labor.

The tumultuous trial was continuously postponed over a two-year period due to protests from al-Assir and the defense team, often stating the trial was politically motivated or sectarian in nature.

Outside the military tribunal in Adlieh were the families of the defendants and supporters of al-Assir, condemning the trial and renewing their calls for a general amnesty.

“God will avenge the oppressed,” the cleric’s father told LBCI News at the protest.

Assir’s wife, Amal Shamseddine, who led routine protests against the trial in Saida and Beirut, was also present.

“We have a long journey ahead of us, but so is our last breath – to the last woman and child,” Shamseddine said at the protest. “Saida is dignity, Saida is al-Assir’s, Saida is ours  … God will avenge us.”

While many in Lebanon have been sentenced to death over the past decade, capital punishment has been under a moratorium since 2004. However, al-Assir’s sentence has been the most high-profile of them all.

The Battle of Abra

The clashes took place from 23-25 June, 2013 in Abra near Saida. Ahmed al-Assir was supported by 300 fighters. A source indicates that local al-Qaeda-affiliated groups such as Fatah al-Islam and Jund al-Sham were involved. The same source also says that then-al-Qaeda-affiliated Jabhat al-Nusra was also supporting the al-Assir.

The extremist cleric was known for his close ties with various extremist groups in Lebanon and Syria. He encouraged supporters to fight alongside like-minded groups in Syria against the Assad regime, forming the Free Resistance Brigades.

The battle ended after the extremist cleric escaped the mosque compound he controlled as the Lebanese Army made their way in. 40 of al-Assir supporters were killed alongside 18 soldiers from the Lebanese Army.

It wasn’t until 15 August, 2015 that al-Assir was arrested at Beirut International Airport as he tried to catch a flight to Egypt with fabricated Palestinian travel documents and a disguise.

Sheikh Ahmed al-Assir, armed militants, and his supporters claim that Hezbollah was involved in the clashes, and the main source of the spark.

The Lebanese Army denies Hezbollah’s involvement, though some sources claim that two armed men affiliated with Hezbollah were killed during the two-day clashes.

Hezbollah’s paramilitary subsidiaries, The Resistance Brigades are notably present in Sidon, and have been accused as the main force of involvement on behalf of the party in the Abra clashes. However, one of the militiamen affiliated with the group claims that they were told by Hezbollah to stay home during the clashes.