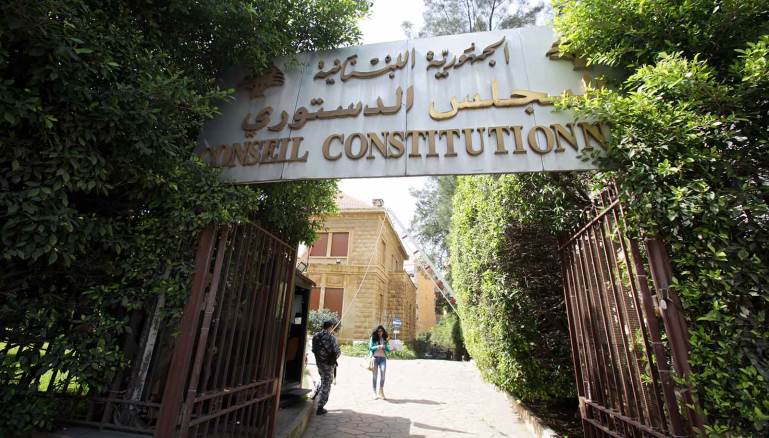 In a rare move by a top judicial authority, Lebanon’s Constitutional Council – a high-ranking judicial committee that looks into the validity of all Lebanese laws – decided unanimously on Friday to rescind the new taxes law enacted by Parliament last month. This would translate into a complete cancellation of all the new 21 taxes voted by Parliament, which included raising the Value Added Tax (VAT) and increasing fees on telecommunications and other services. The new tax hike law had been recently challenged by 10 MPs, who submitted end of August the appeal to the Constitutional Council. The signatories of the appeal included Samy Gemayel, Nadim Gemayel, Samer Saade, Elie Marouni and Fady Haber (from the Kataeb Party), in addition to Dory Chammoun, Fouad Al-Saad, Salim Karam, Khaled Daher and Boutros Harb.

In its decision, the Constitutional Council cited the authorities’ failure to enact a comprehensive national budget based on properly compiled public finance accounts, which according to the Council’s members is a prerequisite to introducing any new source of public revenue. The Council’s decision also cited several breaches linked to the principles of tax equity and equality among citizens.

The Council’s president Judge Issam Sleiman announced in a televised interview that the next step would be that the Government and Parliament take up full responsibility for public financial policies, including finalizing the national budget according to proper procedures.

It is important to note that Judge Sleiman had already indicated in previous communications that the new taxes law is completely independent from the public sector wage bill reform law. Accordingly, the government is expected to pay all civil servants and retirees new increased wages according to the enacted law, as of this October 2017.

While several analysts had warned that increasing public sector wages without earmarked financing could threaten the stability of the government’s deficit, several experts have confirmed that currently the Ministry of Finance has enough resources to cover the increased wages expense for this coming year. The funds are mostly available due to increased earnings on banks’ profits, following the hefty revenues they achieved during the financial currency swaps implemented recently by the Central Bank. According to the same analysts, the 1.4 billion US$ estimated cost of the wages increase could also be covered by implementing immediate measures to reduce wasteful expenses, evaluated at more than 3 billion US$ annually.