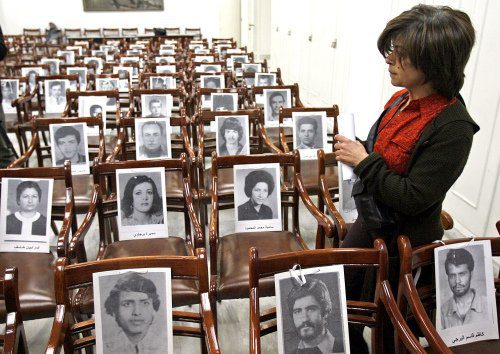 Lebanon’s Forcibly Disappeared: To Forget, We Must Remember

Lebanon was recently struck with the devastating loss of eight of its soldiers who were held captive by Islamic State militants over three years ago in the outskirts of Arsal. Hussein Youssef, father of the martyr Mohammed Youssef, writes to his late son: “1120 perfectly full days, in all their hours, minutes, nights, and seconds, I stood tall so that he knows that I am here, always, forever, until he returns.”

The news of their martyrdom ignited national outrage clearly expressed by families of the martyrs and activists who have been calling authorities for answers regarding the fate of the militants. The government was accused of providing none but false hope to those supporting the cause, while showing no intents towards getting answers to the many questions on the front line. The incident itself served as a reminder of the missing and the forcibly disappeared during the Lebanese Civil War a quarter century ago.

The State Council in Lebanon guarantees, as part of its role, the right of the families of the missing and the forcibly disappeared to know the fate of their loved ones. The Lebanese State was urged to firstly work on collecting biological samples from the families to run biological tests that help in the identification process. Secondly, there were multiple calls for a law to be enacted to establish an independent national committee focused on determining their fates.

Within this context, the “Parental Committee of the Kidnapped, Missing, and Forcibly Disappeared in Lebanon” recently released a song entitled “I did not stay, I did not leave” (“لا ضليت و لا فليت”) written by Sawsan Mortada, composed by Ahmad Kaabour, and sung by Chantal Bitar. The song was set to be released on the 30th of August but was postponed to give more time for the ongoing investigation around the assassinated Lebanese soldiers. The President of the committee, Wadad Halawani, stresses on the importance of standing with the victims: “We will not stop fighting for them no matter the obstacles and series of lies and ambiguity we’ve been faced with.” And that “this song serves to shed light on the cause through genuine art especially as we are in the age of audio and visuals—The song is found in video-clip format and would be aired on various T.V. channels.”

The song gained popularity rapidly as it spoke to the many who have lost their loved ones during the Civil War, and most recently those who are related to the Lebanese Army’s martyrs. It contained recordings of the parents themselves describing personal hardships in the wait for any news about their missing loved ones. In fact, the very first scene of the song video-clip features the mother of a missing victim as she attempts to turn on her very own son’s phonograph for the very first time in 35 years. The scene was followed by other ones featuring mothers tearing up as they attempt to get answers to questions regarding their loved ones’ fate.

The song followed a very personal-perspective in sending out the greater message. This was well noted through the transformation of what were once colourful pictures into means of remembrance and utmost grief. In a meeting with Lebanese officials, activists, and parents—Halawani concludes by leaving the following statement in open air:

“It is a damned country we live in that leaves its people dreaming of gravestones for bodies that are yet to be found.”

The authorities have been reviewing a file pertaining those who went missing for a long time now. The file includes over 17,000 documented cases which include murder, imprisonment, and kidnap during the Lebanese Civil War. The Taef Agreement, which ended the Civil War, provided no added value to the file itself. Parents of the missing had to wait an entire decade for governmental officials to review the file in the year 2000. The parents received the investigation’s partial and minimal results later in 2015.

The song came in to revive discussions over this open wound. In the song, Sawsan Mortada writes:

To add your voice to those demanding that the Lebanese government implements more concrete steps to search for the fates of the missing and the forcibly disappeared and the sharing of these fates with their families, you can sign the national petition on this link.