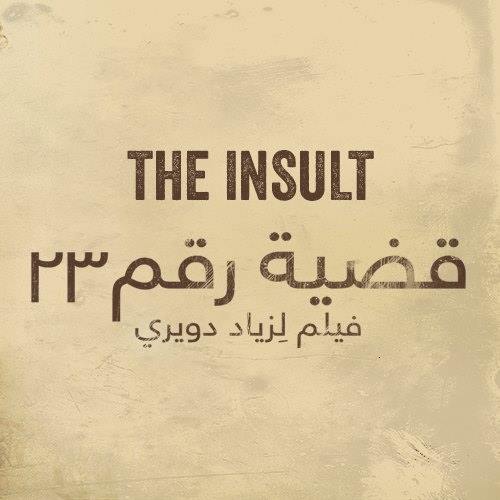 The Insult: A Lukewarm Attempt at Promoting Post-Civil War Reconciliation

Though Lebanon’s civil war ended in 1990, the issue of post-war reconciliation still exists; for starters, the sectarian and xenophobic tensions have yet to be resolved, and the post-war reconstruction program has only exacerbated existing displacement and socioeconomic woes. Unlike the vast majority of art to come out of mainstream Lebanon, Ziad Doueiri’s latest film, The Insult comes off as a blunt film that aims to take on one aspect of this issue head-on.

The Insult focuses around two characters Tony (Adal Karam) and Yasser (Kamel El Basha). The former is a Christian Lebanese mechanic who is infatuated by Lebanese politicians like former president Bachir Gemmayel and head of the Lebanese Forces party Samir Geagea. Yasser on the other hand is a Palestinian refugee who works illegally as a foreman for a public works company.

A verbal dispute turning to hate-speech and violence led to a court case that turned the entirety of Lebanon upside down. Suddenly, tensions from the civil war that abruptly halted in 1990 intensified again.

However, through some common humanity, tensions eventually eased between Yasser and Tony. The moral of the story is rather simple: we need to talk together and to reconcile differences that led to the death of at least 150,000 people during the Lebanese Civil War.

The film tries to shed light that militias and factions on all sides during the civil war committed massacres and atrocities, notably the Lebanese National Movement and their Palestinian counterparts. Given that Lebanese combatants and officials who took part in the war are not shy to admit that they have done so, I find it strange that this had to be one of the movie’s overarching statements.

Another problematic element of the film is that Yasser and Toni are placed on entirely equal footing. Yasser is not part of any political association or militia, nor was he ever. On the other hand, while Toni was a child during the civil war, he is an ardent supporter of the Lebanese Forces party, does not question their rhetoric, and claims to be willing to take up arms if a civil war in Lebanon reoccurs.

Moreover, Yasser previously lived in Jordan and Kuwait before moving to Lebanon in the early 1980s. The movie almost takes a more sympathizing stance towards Toni, despite his issue with Palestinians being sectarian or xenophobic, while Yasser’s appears to be more in line with how the Christian Lebanese Forces and Kataeb Parties cooperated with Israel during the civil war.
Another element that doesn’t put them on equal footing is their different circumstances; Yasser is a stateless refugee in exile following the 1948 ethnic cleansing of Palestine, Toni is a Lebanese citizen who enjoys more privileges in society.

That said, I commend the film for showing how Yasser was laid off from his job for being “a risk” simply due to his Palestinian ethnicity, and for using a fellow working class counterpart in Toni. Though the film does not explicitly do so, I hope that gives a clear hint to the audience that the Lebanese political establishment exploits its working and middle class constituencies with sectarian and xenophobic rhetoric.

A slightly more accurate exposition of Lebanon, but no dice

All in all, Doueiri has not managed to pull off a meaningful follow-up film to the epic West Beirut in 1998.

There are other films that describe some of Lebanon’s post-war problems, such as Asfouri in 2012. While it did a great job in touching on the issues of the problematic post-war neoliberal reconstruction period and how it tore families and communities apart, it does not tackle the issue of sectarian or political reconciliation.

The Insult will definitely resonate well amongst the Lebanese community, both locally and in the diaspora, and I definitely think it’s high time that an issue like anti-Palestinian racism takes center-stage in Lebanese art – minus the underground. This is definitely a plus. Unlike Nadine Labaki’s Where Do We Go Now?, The Insult at least tries to tackle such an issue using a more accurate setting.

Unfortunately, with The Insult compromising many historical realities, it will play a role – regardless of whether it is intentional or not – in misleading the audience in the true setbacks of proper reconciliation and post-war justice.

The Insult will be released in theaters in Lebanon on September 14, 2017.