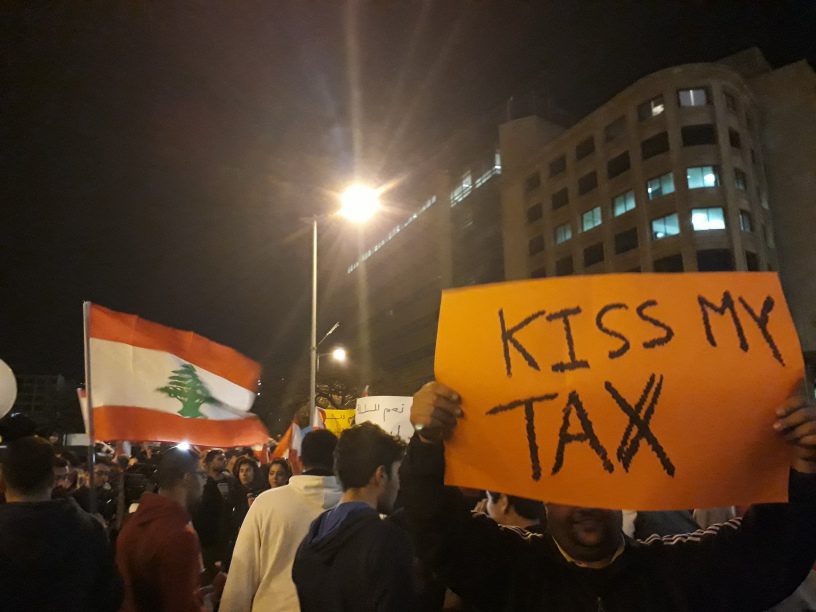 Lebanon’s residents, and those traveling into and out of the country, are already feeling the impact of the new tax increases recently enacted by the government. Telecommunications costs, especially mobile telephony, have increased immediately due to an increase in the Value Added Tax (VAT) from 10 to 11%, and the imposition of a new fiscal stamp on phone bills (2,500 LBP or 1.67 US$). Travelers leaving the country by land will need to pay a new 5,000 LBP (3.3 US$) tax, and those leaving through the airport will pay for instance an additional 10,000 LBP (6.67 US$) on economy class and 35,000 LBP (23.3 US$) on business class. Those traveling within a radius smaller than 1259 Km are exempt of these increases (namely travels to destinations such as Amman, Damascus, Cairo, Baghdad, Najaf, Basrah, Erbil, Athens, Yerevan and Istanbul, among others).

The tax hike law (Law 45), which was published in the Official Gazette on 21 August 2017, stipulates increases in 20 tax revenue streams, with the most prominent being the VAT increase to 11%, a 7% tax on interest revenues from bank deposits (up from 5%), and several increases in stamps and public fees (like doubling the fees of public notaries). The law was approved by Parliament last July despite several protests held throughout the year, and was signed by President Michel Aoun on 21 August 2017, together with the public sector pay rises one. In fact, the new tax hikes were explicitly linked to the financing of the new salary scale for public sector workers. It is estimated that the new public wage bill will cost an additional 1 billion US$ per year, while the new taxes would generate an estimated 1.1 billion US$. Yet several economists and local experts argued against tying new taxes to the wage hike, demanding instead that all new public expenditures and revenues be enacted through the central government’s budget, which is yet to be finalized and voted upon by Parliament. With elections theoretically set for May 2018, the ruling parties felt the need to increase public wages swiftly to rally voters, and resorted to a pool of indirect taxes that can be quickly collected in order to limit the public deficit.

The new tax increases are expected to severely affect consumers’ purchasing power and erode their income. The majority of these taxes affect the costs of goods and services, and companies are expected to increase their prices between 10 and 15% to absorb the higher costs of doing business. Despite many government officials expressing assurances that prices will not increase, given that many consumer products like basic foods are already exempt from VAT, they ignored the fact that VAT and public fees increases will affect the costs of procurement, transportation, and other company business operations, which will ultimately lead to most businesses shifting the burden of these new taxes on to the consumers.

The new tax hike law has been recently challenged by 10 MPs, who submitted on Wednesday 31 August an appeal to the Constitutional Council, with the aim to suspend the law until the Council issues its verdict as to whether its articles abide by the Lebanese Constitution. The signatories of the appeal include Samy Gemayel, Nadim Gemayel, Samer Saade, Elie Marouni and Fady Haber (from the Kataeb Party), in addition to Dory Chammoun, Fouad Al-Saad, Salim Karam, Khaled Daher and Boutros Harb. The Council might reject the appeal, and if it does then the law can no longer be officially challenged and the new taxes will remain in effect.