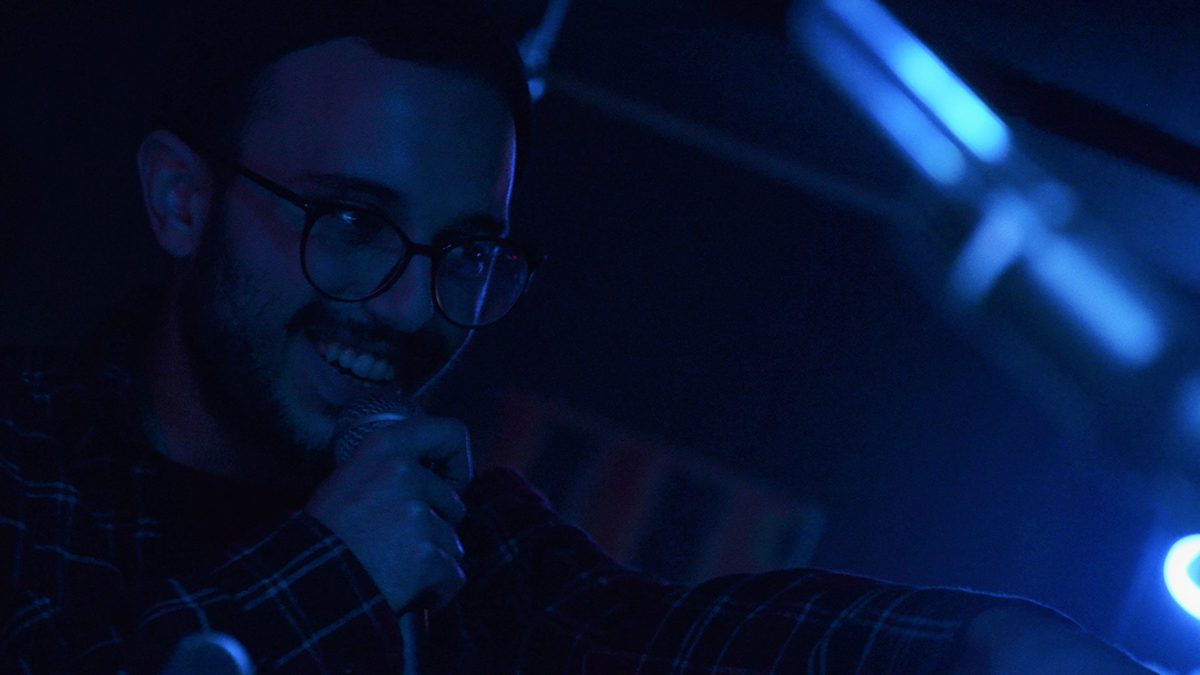 The work of Arba’een as a musician is best described as “brilliant but lazy,” given his tendency to sleep on projects for long periods of time but to come up with bangers when he actually puts effort into them.

Nadim Karanouh, a music producer and rapper based in Beirut, changed his stage name from Lil 40 to Arba’een when he began taking rapping more seriously in 2020. He developed a voice that complements the character of his production, using both English and Arabic in his lyrics.

The musician had started making hip hop music in 2019 under the name Lil 40 after growing a passion for producing beats influenced by both old school and modern hip hop artists.

He recently finished his debut EP, The Birth of Arba’een, with the help of his friend and fellow musician Karl Bourj. The album was pre-released at Quadrangle in Hazmieh on January 20. Beirut Today chats with Arba’een about his music, influences, and more.

Beirut Today: What’s the story behind the change of your name from Lil 40 to Arba’een?

Arba’een: Lil 40 was a phase where I didn’t take my music seriously and considered it a hobby, plus the name didn’t carry any meaning. Arba’een, or “أرﺑﻌﯾن” in Arabic, has many meanings in culture, religion, and society.

For example, they say that 40 is an age of wisdom. When I started to take my music production and songwriting seriously, I needed the name change as a push to become a better and more developed person and musician.

What do you think defines a better person and musician?

For me, becoming a better person meant maturing and becoming more accepting of changes that affect me as a person. As a musician, maturity also played a part because I stopped being afraid of showing vulnerability in my music and just expressed how I felt and how I wanted to.

How has your production style shifted since going from Lil 40 to Arba’een?

My production style has become more refined. I started taking bigger risks and becoming bolder with my choices of words and music. I am no longer doubtful of myself when I make music, and I have been trying to fit in with the industry’s style in my own way.

What are your songs influenced by?

When it comes to music production, they’re influenced by hip hop artists ranging from old school to contemporary hip hop. But my songwriting mainly involves my personal struggles in life and my insecurities, as well as struggles with living in the troubled country that we live in.

How does it feel to be a music composer in Lebanon?

It was hard to begin making music in a society where some people wouldn’t take what I’m doing seriously. Brushing off the fact that other people’s opinions don’t really matter and believing that they don’t define what I am doing really helped me progress and build a mentality to do my own thing without being affected by criticism.

And I also believe that this music would not have existed without me and that it could potentially change someone’s life somehow.

Tell us more about your first EP, The Birth of Arba’een.

The Birth of Arba’een highlights the stages of me transitioning from Nadim to Arba’een. I’ve been working for almost a year to try and compile an album that comes together and tells my story. It consists of 4 tracks: Ken Lezim Tkoon, Lamlim, Arb3een, and Khamis.

What do you think is the one defining trait of The Birth of Arba’een?

The Birth of Arba’een is progressive. It takes you from a slow and emotional vibe into a more aggressive tone, showing how my struggle begins from myself and expands to the outside world.

Has the album production process taught you anything? And what?

I learned that my work doesn’t need to be perfect, and that I should be satisfied with what I am doing so that I can move on and create more music that will help improve my skills as a songwriter. I also learned that it’s more than okay to make mistakes and own up to them because they help me figure out what my music lacks.

How did you discover your passion for music?

My background in music influences is diverse. I used to listen to genres including rock, hip hop, and trance. I started playing the guitar and other instruments because of my love for rock music. I got into music production when I started fiddling with hip hop music in 2019.

And how did you improve your skills as a musician?

I met the right people who supported me in my music and helped me advance as a musician and songwriter. The most recent example is my good friend, musician Karl Bourj. He helped me with finally finishing my EP before I left to the United States. He’s featured on 3 of 4 tracks on the album.

How did Karl Bourj help with your EP?

Karl and I have different styles of making music, he makes experimental music while I do hip hop. He became very intrigued by the beats I make and has been wanting to collaborate with me for over a year or so, and we finally made it happen this year.

He basically helped me arrange every song in terms of having sounds coming in and out of them at specific times, and also added some of his instruments to complement the tracks where I felt it was needed. He also guided me through the process of releasing it onto streaming platforms.

His biggest contribution though, was him encouraging me to finish this EP before I left the country, which I am beyond grateful for.

What do you hope people will take away from this album?

I can’t pinpoint anything specific I want them to take away from the album. Instead, I’d like to hear every listener’s own takeaway, because there are a lot of different emotions and expressed frustrations in this EP. It depends on how they will react to them.

When will you release your EP?

The initial release date is February 1.

On which platforms will you release it?

It’ll be released on most music streaming platforms: Spotify, Anghami, YouTube, and more.